When it comes to choosing electric toothbrush, you have lots of choice. There’s loads of different models from the leading brands.

What we want to do in this article is just give you a few key pointers to help you in that decision process of finding your next electric toothbrush.

To make it a little bit simpler, we ranked the main features that you find in electric toothbrushes on a scale. We’ve got high, medium and low. High being the most important, medium being sort of nice to have, low they’re really the last things that you should be considering in terms of priority when choosing electric toothbrush.

At the high end of the scale is a timer and pacer.

Dentists recommend that you brush your teeth for two minutes, twice a day, preferably first thing in the morning and last thing at night.

Two minutes isn’t a massive amount of time, but when you’re brushing your teeth, it can seem like quite a long time. A lot of electric toothbrushes have a two minute timer built-in and quite simply this alerts you when the two minutes is up.

Some brushes will automatically power off, some will pause slightly differently or make a sound, but that two-minute timer can be really helpful in telling you that you’ve brushed for the right amount of time. If you take a manual toothbrush, you’ve got to either time it yourself or keep an eye on your watch or a clock.

The timer will kick in from the moment you power the brush on and then it will either automatically power off or give you other alert, depending on the model, and you know that you brushed for the dentist recommended time.

The next important factor is a pacer, often known as a quadpacer or 30-second timer.

If you take your mouth and split it up into four sections, you’ve got your upper right, upper left, bottom right, bottom left. The idea is you spend 30 seconds cleaning each of those sections. Piece them together and that gives you the 120 seconds or the two minutes it takes to clean your teeth.

Electric toothbrushes with timers and then a quadpacer built in will break brushing time into those 30 seconds and they’ll give you audible warnings via sound or via pauses in the brush head motion to alert you. So you’ll do 30 seconds on one section,
you’ll hear the sound or the pause, you move to the next and then carry on until the two minutes up.

The first of the lower priority, but medium ranked, is a pressure sensor.

A pressure sensor as the name implies is when you brush too hard, it alerts you. That’s usually with a light on the back of the handle, a vibration in the handle or some sort of audible notification to tell you you’re brushing too hard.

When you brush your teeth, the bristles of the toothbrush only needs skim the surface of your teeth and gums and the pressure sensor stops you from brushing too hard, because as soon as it detects that, it will alert you. The theory is you then stop and then you carry on brushing in the correct way. 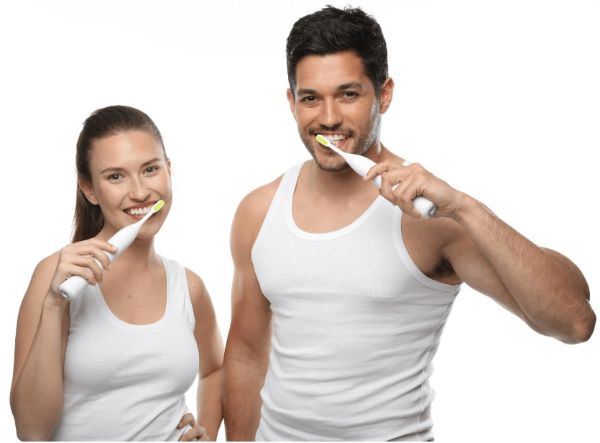 Toothbrushes start from about ten dollars and go up to several hundred dollars. The reality is you don’t need to spend a fortune. You’re probably better off spending somewhere between 60 to 100 dollars as a rough guide.

That will get you a very capable electric toothbrush.

You can pay a lot more, we are not saying don’t if you want or can justify those features, but for the vast majority somewhere around 60 to 100 dollars will get you an excellent electric toothbrush.

This can be more important for some than others. Ideally you want it to be a couple of weeks, so you do not have to constantly charge it. But if you don’t travel all that frequently and you leave it on the charging stand, which is perfectly safe to do, then a week’s battery life may be enough.

But if you are going on holiday for two weeks, if your battery can last that two weeks that you’re away, you won’t need to worry about taking the charging stand and running out of power.

So it’s nice to have longer battery life.

Generally speaking Philips Sonicare brushes have the longest battery life, but Oral-B have certainly caught up and Colgate battery life tends to be about two weeks.

Generally speaking I don’t suggest that you need a brush with lots of cleaning mode. Tongue cleaning mode and whitening don’t really make much difference. They either last for longer or shorter time, they’re not important.

If we had to pick any cleaning modes over and above the standard cleaning mode that comes on a brush, it would be like a gum care or a sensitive mode because they tend to use less power from the brush motor and are better if you are suffering with sensitivity and don’t want the full power of the brush motor each time you brush.

Running into the low priority features, we have brush head shape and size.

Clinical studies do suggest that the small round brush heads are clinically better. They can remove more plaque and bacteria.

However, in most instances, that relies on everybody using the exact technique as you should be brushing your teeth. The fact of the matter is a lot of people don’t use the correct tooth brushing technique.

There’s a right and wrong way to brush your teeth. When you’re using electric toothbrush, you don’t need to go all over the mouth. You need to move from tooth to tooth to tooth.

All brands will provide a very good clean, better than a manual because of the increased speed and a number of movements.

You then have features like Bluetooth technology, which is innovative, it’s a thing of the future for sure. There are some advantages in the way it can coach you and educate you and give you data that you wouldn’t have otherwise had. But at this time whilst there are some good examples, it’s probably a bit of a luxury and most people don’t need it and you pay a premium for it.

If it’s built into the toothbrush then it’s a bonus. Try it out, but don’t go spending lots of money because for a lot of people they don’t get the value from it. It can be useful in the right circumstances and if your budget can justify it, go out and try it. But I wouldn’t say it’s a massively important feature,

Then you get other smart features like brushing technologies.

One example from Sonicare which gives you reminders of when to change the brush head and automatically change the cleaning mode for you. They’re really nice clever features but you can pay a premium.

As technology move forward, more of this technology is coming into cheaper models and you’re not having to pay a premium, but I wouldn’t suggest that all of these are things that you should necessarily pay a premium for. If you’re looking for an overall good value brush, don’t worry too much about smart features. Focus more on the timer and the pacer than anything else.

How to Choose Right Toothbrush

Are Smart Toothbrushes With App Worth It?

How to Choose the Best Electric Toothbrush