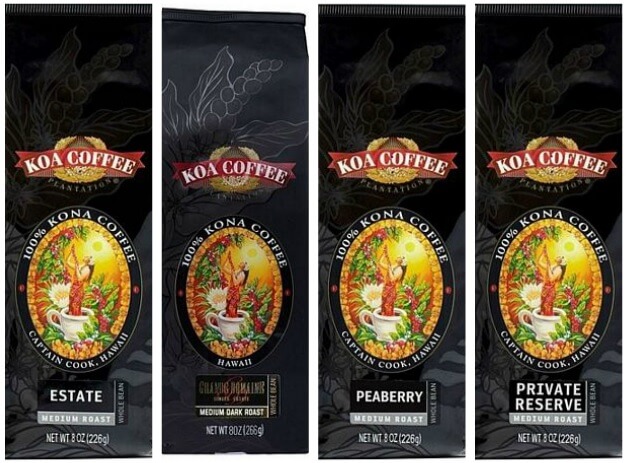 Today I’m going to do a review of Koa Coffee brand.

I hadn’t really heard that much about it until I was doing some research online trying to figure out what the good coffee is.

I want to do a little background on the Kona coffee.

Hawaii is the only state in the United States that actually grows coffee and I didn’t know that before I started doing a lot of research. There are others, like Puerto Rico, it has coffee but it’s not a state.

That’s interesting because there’s only a little path on the side of a volcano in Hawaii where they can grow coffee.

With all that being said, let’s get to the tasting. I’m gonna start with the French press, go to the drip press and end with the cold brew and I’ll give them a score.

I’ll tally them up and there will be a score.

The one thing I need to mention about this coffee is that I’m using an 8 ounce bag. It costs $22. So this is by far the most expensive coffee in the bag and it’s whole bean, which I really enjoy, because I like to be able to grind my own coffee.

But let’s get to the taste.

It has pleasant aroma, there’s no bitterness smell to it, it smells really good and really smooth. It’s got a good earthy smell, which is not overpowering and overwhelming. It has no odors, no sour smells. It’s a very pleasant smell. Score: 9

The taste is also really good and really smooth. It’s not bitter at all. Score: 9

It’s not terribly bold because it’s a medium roast. Score: 8

Its drinkability, out of the French press, is pretty good. Score: 8

What’s unique is that’s Hawaiian coffee. This is hand-picked from the highest rated Kona beans. Score: 10

When it comes to the cost, it is one of those things where you must compare the quality with the price and the uniqueness and all that stuff. It does taste very good but is it worth the money? That will be determined at the end. Score: 7

Next is drip press.

The taste it’s not as full-bodied as it is to the French press. You would expect something like that because the way the French press operates – the beans actually get to sit in the water, where in the drip press, it just washes over it.

Boldness is the same. Score 8

The drinkability like this would be very good. It’s one of the smoothest coffees that I’ve ever had. Score 10

Uniqueness is the same. Score 10

If you like your coffee just straight black and real smooth, this is working out really good.

The last one is cold brew.

I’m not a terribly big fan of cold coffee, but I want you to be able to know all the characteristics so you can make an educated decision whether you want to buy it or not. In the end, you still must choose on your own. I’m here to just give you heads up what’s going into it and whether or not it’s worth it.

If you’re looking at the grocery stores, you may be overwhelmed with how many there are. I know I am. Each time I walk in, there is something I need to find out: which one is bitter, which one is full body, which one actually have a good taste, etc.

It’s just the coffee itself I’m reviewing. It’s not the creamers or the sugars or whatever that you put into it. It’s just what a good cup of coffee is.

It got a little bit of aroma but it’s not nearly as strong as hot coffees which allow it to open up. Score 7

Taste is good but it’s not as strong as the French press, which is definitely the best with this one. I mean it’s good, don’t get me wrong. There is no bitterness. Score 7

Uniqueness is the same. Score 10

Also, out of all the coffees that I’ve drank, it’s the smoothest, has the best flavor and it’s definitely the most expensive.

The French press would be my first choice because when you can grind your own beans and you grind them a little bit coarser, than you get the full flavor in the full experience of this Kona coffee.

Where to buy Kona coffee?

The best place to buy Kona coffee is Koa Coffee company. It started as a small family business in 1997. Their hand-picked Kona Coffee has won the Gevalia Cupping Competition, PCCA Coffee of the Year. They made Forbes’ “50 of America’s Best” as the “Best Coffee in America.”

They are the best because they pick every bean by hand. They harvest only when the beans are cherry red. No machines are sued. This means that no bitter green beans are mixed in with the red.

You can choose between five different products:

Peaberry – Connoisseurs have dubbed Peaberry the “Champagne of Kona.”

Private Reserve – Consistently one of the top sellers. With good reason!

Swiss Water Decaf – All the rich Aloha taste you love — but without the caffeine.

Estate – it will put a smile on your face, before you even pour the water.

What makes Kona Coffee the Best in the World?

I want to tell you what makes Kona coffee as famous as it is.

Any coffee needs to have two components of the highest quality. One is growing conditions and the other one is processing methods.

That is to say that even at sea level in Kona, they have sun angle and weather conditions that are comparable to coffee growing regions elsewhere in the world, much closer to the equator at much higher elevations.

For instance, the best coffee from Jamaica comes from 3,000 feet, all the way up to 5000 feet or even higher. It is similar in many other coffee growing regions.

The single most important component that makes Kona coffee so good is the soil. Coffee must have well-drained soil and mineral rich lava soil is absolutely ideal.

Other growing conditions include that coffee must have forty to sixty inches of rain per year. If they do not get enough rain, they use irrigation systems that can deliver the water to the trees when they need it and as much as they need it.

Coffee also needs a dormant period, with shorter days and cooler nights. That’s there between November and February. During that time, there also needs to be a period of six weeks with very little rain so that the coffee can go through its natural cycle.

You often hear about a coffee that is shade grown. In Kona that depends on the elevation.

Coffee evolved in the jungle canopies of Ethiopia and in elevations where you have much more heat you have to grow coffee in shade trees. A lot of times in farms under 1200 feet coffee is grown around macadamia nuts or avocado or other kinds of shade trees and they are clustered.

The reason that in Kona they don’t need shade at this elevation is the weather. There are approximately nine different types of climate zones in the world and seven of them are represented on this island.

So when you come and visit, you can never answer a question ‘how is the weather in Hawaii?’ Your answer should always be: what island, what side, what elevation.

So it very much depends on where you are.

Part of the climate pattern above 1400 feet is that in the mornings they frequently have blue sky and then in the afternoon, pretty much every afternoon, it’s overcast. That’s their natural shade.

That’s the reason they want all the sun they can get and that’s why some plant their trees far apart. At this elevation, trees should not be closer than six feet or so.

There are some other things pertaining to organic growing. The basic premise of organic growing is that you do everything to feed the soil and then the soil feeds the trees. Not the other way around.

If you have chemical fertilizers, it’s like putting a kid on a sugar diet. You feed the trees directly but you do nothing for the soil.

They do everything organic. They use organic compounds, such as microbial soil inoculate that transforms the minerals in the soil into a format that can be more easily taken up by the plants.

The irrigation systems are sort of overhead because they don’t want drip irrigation which in this kind of soil would form an onion of moisture and the roots want to stay there. They want their roots to go everywhere.

Now I want to talk about processing methods, which are of enormous importance.

When you have the cherries picked and you have the beans separated, there is nothing you can do to improve the quality of these particular beans, but many things to mess it up.

They pick the coffee by hand in belly basket. They put them into bags and they bring them to their processing locations.

They weigh the beans and then they go into the hopper and they get transported up into a cherry tank. In the cherry tank, they float their cherry and anything that floats, they skim off and throw away.

From there they are transported by the means of water into a machinery. There, first, the coffee gets de-stoned, if there’s a little bit of gravel in it. It gets clean and then the coffee gets in wet mill.

In other words, the cherry skins get separated from the beans. They catch the skin and make it into organic fertilizer.

Really great companies have their mills set so sensitively that only the really ripe cherry will pulp. Everything else, the green ones, the pink ones, they all get kicked out back in a bucket and they do not recycle those things. They just make them into organic fertilizer. A lot of people recycle them again because they want higher yield.

Then the beans come out.

Now, there is a mucilage. It’s the slimy, high protein compound that’s around the coffee beans themselves that needs to be removed.

Traditionally that’s done in a process called fermentation. It is wet fermentation, where coffee is covered with just a little bit of water and then depending on the water temperature and the elevation where you are at, it needs to sit there for roughly 24 hours and it needs to be agitated 4-5 times and then rinsed 4-5 times to get all of the mucilage off.

This mucilage is also used as organic fertilizer.

After the mucilage is removed, the squeaky clean beans come out and then they go into a water tank. Again, anything that floats they skim off and throw away.

(This part that they throw away is used by some people. They dry it and roast it. It’s good Kona coffee but it’s not the best Kona coffee.)

Really good coffee specialists put coffee beans into the tank for at least 10 to 12 hours overnight and the next morning they skim again anything that floats and throw it away.

Then they pump up the beans on the drying deck where they get dried.