This is review of the best call blocking device for landline phones.

This is the CPR Call Blocker and it’s a customer top rated device!

Next time your phone is ringing and you do not want to answer because you do not know who this person is, all you have to do is press big red button Block Now. You’re gonna see the device say Successful, it will disconnect that call, it’s gonna add it to the list and now it is prevented from ever calling you again.

According to a 2016 Robocall Strike Force Report, it’s estimated that US consumers received approximately 2.4 billion robocalls per month in 2016. It’s insane.

According to a December 2017 FTC report, in 2017 the FTC received an average of more than 375,000 robocall complaints per month.

According to a February 2017 IRS news released, the IRS has become aware of over 10,000 victims of phone scams.

They’ve done the work for you. They’ve actually identified 5,000 worst known offenders when it comes to the robocalls, the scam calls, the nuisance calls and they added this to the CPR Call Blocker.

Then you have an additional 1,500 numbers that you can block along the way. 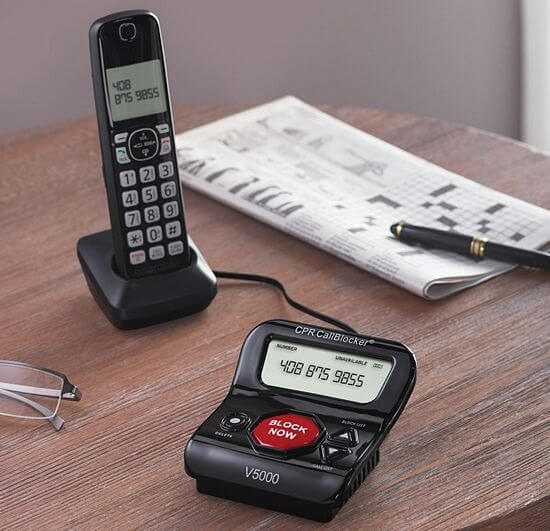 The beauty of this device is the minute you plug this in, your home phone, your landline is going to start ringing less.

So this is for a landline phone, you’re not connecting this to your cell phone.

But what if I changed my mind and I want to unblock a number or I block it accidentally?

All you have to do is come over to the blacklist and then you’re gonna see the calls that have come through, that you’ve actually blocked, and then you just undelete those from that list.

It’s that easy. Everything about this device is easy.

It’s a two click installation, it takes about 10 seconds. It’s one of those things that gives you instant satisfaction.

Tip: when you receive a scam or nuisance call, keep in mind that these companies are actually recording your Yes to use against you later on. So if you ever receive a phone call and they ask you ‘can you hear me’, just hang up, do not speak.

This device takes the worry out. You don’t have to be rude, you don’t have to feel bad when you disconnect. Let the CPR Call Blocker really take care of you and your home.

It doesn’t matter if it’s out of area, fake or spoof calls, you’re able to block simply by pressing a button. There is a really large three inch display, which is nice, so it makes it really easy to see those calls.

The setup is actually two clicks, your phone line and the power and it works with an existing landline but you do need to have caller ID for your landline at home. These are the only thing that you need.

Tip: When you receive a phone call and you hear that the IRS is calling, immediately block that number. Why? Because the IRS will never contact you via phone, it’s always through the mail. That’s one of the biggest scams I keep reading about right now – fake IRS phone calls. There is something called neighbor spoofing. It might be like your area code and maybe the first couple extensions of your area, so you think it’s a neighbor, maybe it’s a school, but you know what, most likely it’s not.

So feel free, go ahead and hit Block Now and then if you realize later that maybe you should have saved that number, you can simply delete it from the list.

Again, this is how easy it is. If you know you do not want to speak to this person, go ahead and just hit Block Now, you’re gonna see Successful and then that disconnects the call and prevents that number from ever calling you again.

This device comes with 5,000 of the worst known offenders and then you can actually block an additional 1500 numbers along the way. That’s a lot of phone numbers! Over time you might be able to delete some of those off the list because they give up.

There are just so many ways to take advantage of the young, the elderly and this is just a really easy way to stop that. You don’t have to feel bad when you disconnect that call, there’s no excuses, you just hit Block Now, it disconnects the call and prevents that number from ever calling you again.

This prevents you from even having to say put me on your do not call list. That is not working anyway.

CPR is all about the call prevention registry. They’ve identified the five thousand worst known offenders of the repeat calls: the fake calls, the spoofing calls, the nuisance calls, calls that you just know is violating your world.

You want peace and quiet at home with your landline, you want to know that it’s friends and family, whoever it is that you want to talk to, is actually calling.

It just restores a sense of peace in your home again and it couldn’t be any easier than hitting Block Now. Most of us aren’t even answering our home phones anymore because we are getting hit with so many calls of people we don’t want to talk to, whether it’s telemarketers, scammers, solicitors, people wanting us to take a survey. It’s just simply annoying.

So if you have a home phone, you really need to have this CPR Call Blocker.


Your phone is gonna be ringing a whole lot less. That’s what I love about the reviews on this device. The reviewers talk about the instant they plug this in, their phone was ringing less from people that they didn’t want to talk to.

How do I connect this device?

No accounts set up, no fees, no subscriptions. It doesn’t cost you another penny! Once you pay for the machine, it works for life. Here is another awesome feature!

Once you have it in your home, all your phones are protected, all of your phones have that five thousand number protection.

So, you’re up in your bedroom and you get a telemarketing call and the CPR Call Blockers is in your kitchen, you can hit # and 2 on any handset in your house and it acts just like that big red button.

This will work with any phone line and any make or model of phone. It doesn’t matter whether you’ve got a cordless phone or three phones in the home. All you need is caller ID active on your phone line. That’s all you need to make it work.

It’s a bit like pressing buzzers on game shows on TV. I think that would give you so much pleasure.

Do you know what I really hate? Useless calls. They really frustrate me and I do not have time for them. They interrupt me, they always call at dinner time, when I try to put the kids to bed or when you’ve got guests around.

The phone rings, who is it, who could it be now?

Now is the time to solve that problem! Block them!

You only need to buy one of these even if you have three or four phones in your home, as long as you run the same line, as long as you have caller ID, it doesn’t matter what type of phone you have or who provide your phone line, even if it’s a VoIP number, one of those internet service providers, you can still use this.

This will work for you. This is called the best call blocker for home phone for a reason.